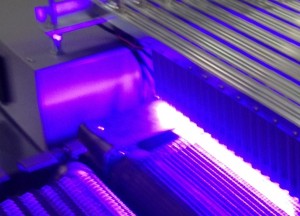 UV wavelength LED lighting has a wide variety of industrial applications including the curing of inks, coatings, sealants, adhesives, and photopolymers. Early UV LED lighting was mainly used for industrial applications including dye inspection, Non-destructive Testing (NDT) inspection, and forensic examination. The output power of UV LED chips has improved significantly in the last decade. Curing with UV LED lighting has many benefits and is becoming increasingly popular as an alternative to curing with conventional UV mercury lamps. UV LED curing units are environmentally friendly and have a much greater energy efficiency than traditional UV lamps. They also have significantly lower operating temperatures and longer operating lifetimes.

Prior to 2006, the output power of UV LED units on the market was much lower than what is available today. Early UV LED curing unit designs were small in profile. These early units had relatively low total power output, and their low-power LED chips didn’t require significant heat dissipation during operation.

In 2006, Sunlite began manufacturing UV LED units used to cure adhesives. These units had a total output power ranging from 2 Watts to 100 Watts.

Competitor’s LED curing units currently on the market were designed to build upon the basic designs of either:

Unfortunately, these UV LED designs do not provide the most efficient UV-energy output possible!