LED lights that use plastic as a lens or a cover can have an issue with LED light discoloration. The heat generated even from a medium-power LED Chip is enough to discolor plastic. The problem is not the LED changing color but the lens or the cover over the LED.

Plastic is not a good lens in terms of efficiency, but when you try and couple that with discoloration of the light output it makes plastic covered LED lights a poor choice for most applications. 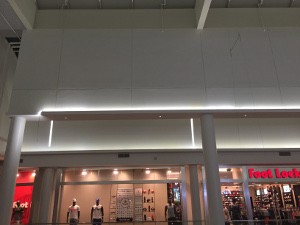 In the photo, you can see where the plastic of presumably LED tape has discolored the output over some of the LEDs. You can see the white that it is supposed to be and the yellowing LED light discoloration that has occurred as a result of choosing a plastic cover.

In addition plastic lenses with an air gap cause light loss and does not allow trapped heat to escape as well as it should. Heat is the enemy of solid state devices (e.g. LEDs, PC’s TV’s) and without effective heat dissipation you will shorten the stated life of the device.

Sunlite Science & Technologies Application Specific LED (AS-LED) uses only glass lenses with no air gap to bring the most light out of the fixture as possible with zero possibility of yellowing or cracking. This patented LED will be operating at the correct color temperature for the lifetime of the LED. Sure using plastic is less expensive, however if you want true colors with the best light output, Sunlite is the answer.

The Department of Energy (DOE) is actively supporting the development[...]

Your email is safe with us.